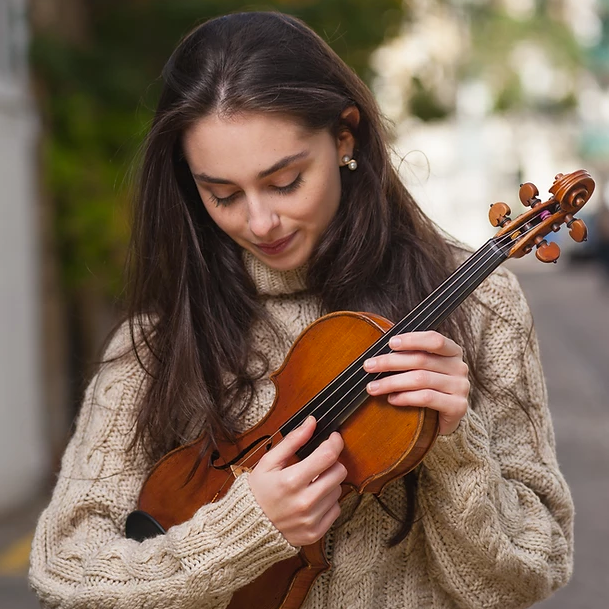 Described as a 'rising star’ by Strings Magazine and as a ‘glamorous and influential star’ by Pianist Magazine, French violinist Esther Abrami has performed in world renowned venues such as Carnegie Hall in New-York, the Wiener Konzerthaus and Leeds Town Hall.

She has recently performed as a soloist with orchestras including the Brooklyn Metro Chamber Orchestra in New-York, Yorkshire Young Sinfonia and Xalapa Filarmonia.

Esther has given solo recitals worldwide in venues such as Stephansdom in Vienna, Salle Cortot and the British Embassy in Paris as well as across the US at Louis Meisel Art gallery in New-York, Parrish Art Museum in the Hamptons and Dixie State University in Utah.

Esther has featured on both TV and Radio shows including Sky News, BBC Radio 3 where she performed the premiere of Chanson d’été by Paul Ibbotson and Classic FM who regularly invite her to perform.

Esther has been awarded a first prize at the Vatelot Rampal violin competition, at The Arts of Instrumental Performance Concert Series "The Arts of Strings" and at the IMKA International Music Competition. She also won the Golden Classical Music Awards International Competition 2017.

Having previously studied at Aix-en-Provence Conservatoire in France and Chetham's School of Music in Manchester, Esther is now in her final year of her undergraduate degree at the Royal College of Music in London studying with Leonid Kerbel.

Esther is playing on a Landolfi violin kindly loaned by Tarisio Auction.

Read More
Upcoming recital at The Royal College of Music (Wednesday 30th of May at 3PM) performed by Esther Abrami, not to be ...